This is an excerpt from an article in the Collegio, Pittsburg State University's student publication.

“The paintings exude fertility and religious imagery, a clash that Elizabeth Darling is drawn to. Her interest in the relationship between spirituality and sexuality comes across in her paintings, which sport sexual symbolism and common religious themes. Although this subject matter is not an easy one to tackle, Darling has been musing on this topic for a long time. ‘I’ve compiled some of the pieces that I’ve been working on for the past few semesters into a body of work that is somewhat cohesive,’ Darling said. ‘I think it’s probably been a little bit different for everyone. I chose to work with that particular content area.’ While the show was the premiere for several of her classmates, Darling has had a bit of experience with art displays. She participates in the University Artists Association, which allowed her to put out several of her works. However, this was her first experience with hanging an art show. Darling knew from the beginning what pieces and concepts she wanted to include in her show. However, especially when it comes to art, things don’t always go as planned. ‘I actually planned on having a lot more pieces that were within the same theme that were ready for the show, but I just didn’t get them done in time,’ she said. The artistic process for Darling has no set beginning or end, just a continuous cycle of creation. ‘It’s just a process, kind of an evolution,” she said. ‘As far as a time frame goes, there’s not really one.’”
- Madison Dennis
Posted by Liz at 11:13 AM

Email ThisBlogThis!Share to TwitterShare to FacebookShare to Pinterest
Labels: Press

These paintings are the bulk of my senior work:


This body of work encompasses ideas about maternity, female sexuality, and religion. The experience of becoming a mother transformed the way I view the female body and the creation of life. Inspired by performing in Eve Ensler's "The Vagina Monologues," I see the vulva as a symbol of feminine power.


This series also reflects my frustration with the Christian Church's role in patriarchal societies. I was raised in Christianity, and although I consider myself agnostic, I have been profoundly influenced by Christian ideas and teachings. I juxtaposed vulvas with the traditional style of religious iconography to connect the spiritual and visceral aspects of my experience as a woman as well as provoke thought about how Christianity (as well as other major Abrahamic religions) has been used to oppress, dominate, and marginalize women for centuries.


Religion is one of the most pervasive controlling forces in society. The Christian Church creates and dominates cultural norms presently and historically. I am particularly interested in the dichotomy between the Church and female sexuality. By integrating vaginal imagery with the traditional style of religious iconography, I hope to make the viewer question the traditional role of women in religion and the relationship between sexuality and spirituality.

Email ThisBlogThis!Share to TwitterShare to FacebookShare to Pinterest
Labels: Embryos, Mushrooms and Moons, Oil
Posted by Liz at 11:07 PM

Email ThisBlogThis!Share to TwitterShare to FacebookShare to Pinterest
Labels: Oil, The Goddess 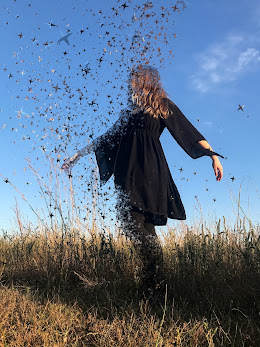 Liz Darling is a visual artist and maker of things from Kansas. With a precise and organized approach, Darling uses watercolor, ink, and various other media to create cosmic, organic compositions. Emphasizing process and exploration, Darling's work engages the intersection of magic, nature, the divine feminine, and the inner child.
-----
This blog is a chronological record of my creative practice.
Contact: lizdarlingart@gmail.com
Website: www.lizdarlingart.com
Shop: www.etsy.com/shop/lizdarlingart
Exhibitions and Publications